The Name of Jesus: Our Credential for Miracles.

Do Ladies have roles to play in pulpit Ministry?

May 7, 2016
0
The high priest and the Pharisees thought; if they could kill Jesus that will be the end of his miracles and invariably the end of his ministry on earth. But that only reveals their ignorance of the plan of God. The focus of God’s plan is not on Jesus, it is on man and for God to achieve His plan Jesus will had to die.

John 12:24
Verily, verily, I say unto you, Except a corn of wheat fall into the ground and die, it abideth alone: but if it die, it bringeth forth much fruit.

Jesus said this while he was relating his glorification to his disciples, but for him to be glorified, he had to die. One important truth that Jesus was passing across to his disciples here was the fact that his death was not for himself but for humanity. In the sense that, through his death he will produce many, that will be like him on the face of the earth. This reveals the futility of the plan to kill Jesus as arranged by the high priest. It tends to worsen the case as the followers of Jesus continued the same work Jesus did while he walk on the face of the earth. The scribes and the rulers took a closer look at the works performed by the followers of Christ they even asked them for the power they used in performing these great works and all Peter could say is the name of Jesus. 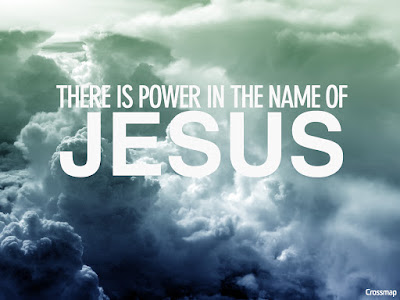 Acts 4:5-10
5 And it came to pass on the morrow, that their rulers, and elders, and scribes,
6 And Annas the high priest, and Caiaphas, and John, and Alexander, and as many as were of the kindred of the high priest, were gathered together at Jerusalem.
7 And when they had set them in the midst, they asked, By what power, or by what name, have ye done this?
8 Then Peter, filled with the Holy Ghost, said unto them, Ye rulers of the people, and elders of Israel,
9 If we this day be examined of the good deed done to the impotent man, by what means he is made whole;
10 Be it known unto you all, and to all the people of Israel, that by the name of Jesus Christ of Nazareth, whom ye crucified, whom God raised from the dead, even by him doth this man stand here before you whole.

Jesus had prophesied the continuation of his works on earth when he said his death will produce many that will be like him on the face of the earth. How he did this was by giving his followers his name. The name of Christ is not just about the letters, it depicts the authority of Jesus. While Christ was leaving the face of the earth, he gave his authority to his followers. He gave them the right to act in his stead.

Matt 28:18-20
18 And Jesus came and spake unto them, saying, All power is given unto me in heaven and in earth.
19 Go ye therefore, and teach all nations, baptizing them in the name of the Father, and of the Son, and of the Holy Ghost:
20 Teaching them to observe all things whatsoever I have commanded you: and, lo, I am with you alway, even unto the end of the world. Amen.

Jesus having made known unto his disciples the potency of his authority, he gave them a mandate, a mission to accomplish on earth. This reveals to us that the authority of Jesus is an instrument that is very pivotal to the accomplishment of the works of Christ on earth.
Authority is different from power in the sense that authority is the right to use power and that is what the name of Jesus represents. That is, anyone that acts in the name of Jesus has released the power of Jesus for action. The power that will get the Job done belongs to Jesus but the key that will release the power for action is the authority of Jesus which is consummated in the name of Jesus.
The name of Jesus belongs to everyone that is a follower of Christ and just like the way Peter puts it; believers have the name (authority) of Jesus.

Acts 3:6
Then Peter said, Silver and gold have I none; but such as I have give I thee: In the name of Jesus Christ of Nazareth rise up and walk.

Acts 19:13-16
13 Then certain of the vagabond Jews, exorcists, took upon them to call over them which had evil spirits the name of the Lord Jesus, saying, We adjure you by Jesus whom Paul preacheth.
14 And there were seven sons of one Sceva, a Jew, and chief of the priests, which did so.
15 And the evil spirit answered and said, Jesus I know, and Paul I know; but who are ye?
16 And the man in whom the evil spirit was leaped on them, and overcame them, and prevailed against them, so that they fled out of that house naked and wounded.

It takes someone who belongs to Christ to be able to act in the name of Jesus I. It has to do with nature of the person. Christ must have given his authority to anyone that wants to act in his place. And Christ has given his authority to everyone that belongs to him. He has given them the right to act in his stead.
Today we pray for power to heal the sick but none of the Apostles raised a prayer point like that, instead they prayed;

Acts 4:24-31
24 And when they heard that, they lifted up their voice to God with one accord, and said, Lord, thou art God, which hast made heaven, and earth, and the sea, and all that in them is:
25 Who by the mouth of thy servant David hast said, Why did the heathen rage, and the people imagine vain things?
26 The kings of the earth stood up, and the rulers were gathered together against the Lord, and against his Christ.
27 For of a truth against thy holy child Jesus, whom thou hast anointed, both Herod, and Pontius Pilate, with the Gentiles, and the people of Israel, were gathered together,
28 For to do whatsoever thy hand and thy counsel determined before to be done.
29 And now, Lord, behold their threatenings: and grant unto thy servants, that with all boldness they may speak thy word,
30 By stretching forth thine hand to heal; and that signs and wonders may be done by the name of thy holy child Jesus.
31 And when they had prayed, the place was shaken where they were assembled together; and they were all filled with the Holy Ghost, and they spake the word of God with boldness.

Phil 2:5-11
5 Let this mind be in you, which was also in Christ Jesus:
6 Who, being in the form of God, thought it not robbery to be equal with God:
7 But made himself of no reputation, and took upon him the form of a servant, and was made in the likeness of men:
8 And being found in fashion as a man, he humbled himself, and became obedient unto death, even the death of the cross.
9 Wherefore God also hath highly exalted him, and given him a name which is above every name:
10 That at the name of Jesus every knee should bow, of things in heaven, and things in earth, and things under the earth;
11 And that every tongue should confess that Jesus Christ is Lord, to the glory of God the Father.

The authority of Christ can be used  by every believer to destroy the works of the devil. What we need to do is to walk in the name of Christ with boldness knowing that Jesus is in full support of his name and that at the name of Jesus the forces of darkness become powerless.
Than ever before, the church must arise and take up the works of Christ on earth, paralyze the forces of darkness and get the job done. It has nothing to do with increasing our church attendance, or amassing wealth, or making ourselves popular.it is about the work of Christ on earth. It is our responsibility, our mandate and our mission. We must become bolder than before; destroy the works of the enemy, heal people of their diseases and get many saved in the mighty name of Jesus Christ.